Children say 'no' to drugs and bullying 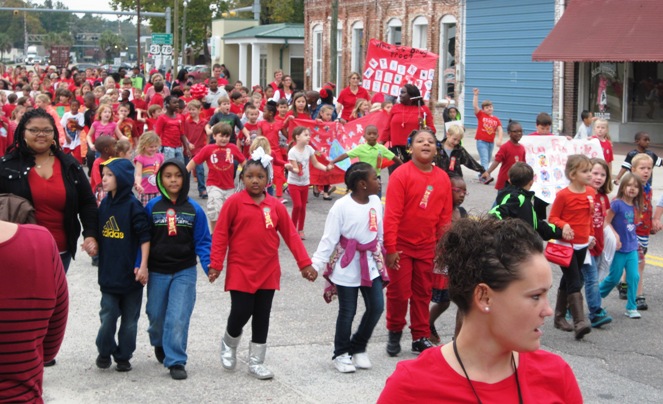 Lockett Elementary School students held a rally and parade on October 26, 2015, in observance of Red Ribbon Week / Stop Bullying Week. Students and teachers paraded from the Railroad Depot to the old high school.

Orangeburg Consolidated School District 4, which includes the Branchville area, has begun installing new digital devices across the district as part of a four-year, $4.4 million technology update, director Julie Christopher informed the trustee board, according to The Times and Democrat.

Also at the meeting, Dr. Tim Newman, superintendent, presented Dr. William O'Quinn of Branchville [shown at right] with a pin and a certificate from the South Carolina School Boards Association in recognition of 35 years of service as a member of the school board.

Orangeburg Consolidated School District 4's enrollment rose in 2015-16, the superintendent says. Even so, few problems arose in the first days of the new school year, The Times and Democrat reported.

Superintendent: 'Our kids can learn'

Dr. Tim Newman, the new superintendent of Orangeburg Consolidated School District 4 (which includes Branchville), says teachers need to get to know their students, then they will discover the best way to teach them as individuals. Read the full story in The Times and Democrat.

He elaborated on his educational philosophy in another article published a week later.

Financial consultant Glen Stiegman said homeowners will not be affected by the one-time increase.

The increases are needed to replenish the district's fund balance -- which was hit hard by unanticipated expenses last year -- and to pay for the coming year's $29.5 million general operating budget, which includes 2 percent raises for all employees.

Full details can be found in The Times and Democrat.

Branchville's public schools and the rest of Orangeburg Consolidated School District 4 have a new superintendent as of July 1, 2015.

By a 4-3 vote, the Board of Trustees named Dr. Tim Newman to the position.

In a later meeting, the board announced Newman will get a three-year contract.

Newman, 51, succeeds Brenda Turner, who announced her retirement after 4 years as the district's top administrator. She told the school board and others that she needs to spend quality time with her mother, who is in poor health.

The Branchville area's board member, Dr. William O'Quinn, voted for Newman, along with Randy Carrigg, Mary Brant, and Aaron Rudd. Voting against Newman were board chair Peggy Tyler, Joseph Garvin, and Linda Huggins. The other candidate for superintendent was Assistant Superintendent Dr. Shirlan Jenkins.

Newman had been the district's assistant superintendent of human resources/ public relations. The board has since named Ernest Holiday to that position.